I bought the Sakura Pigma Micron 6-Color Set in the 05 size specifically to use for scrapbooking. I wanted a good multi-color set of pens that would last me through the ages. In other words, they would need to be waterproof, archival and consistent writers. I just purchased the Set of 8 in Black for my little sister, so I already knew these were quality pens. Since I purchased them, they have been used for Project Life scrapbooking and, after I fell off the scrapbooking wagon, for watercoloring. They are also very useful for addressing envelopes because they are waterproof.

Japanese pens tend to have very functional and user-friendly designs with a few elegant touches on top. The design of these pens feel no different. The caps have nice, springy clips and the finials have a metallic version of the color with the tip size number printed in the middle. The other end of the pen show the color of the pen again in a matte plastic form. The body of the pen is a beige color and has all the necessary details. 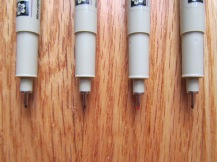 These felt tip pens come in multiple tip sizes, from 005 (or .20mm) to 08 (or .50mm), but I bought the 05 size (.45mm) because I wanted something with a larger width for writing. The felt tip is encased in metal, which increases the stability and durability of the tip. I still wouldn’t press too hard because it isn’t indestructible. That being said, you don’t need to press hard for the color to come flowing out. Overall, I feel the design is simple, elegant and functional, which is really all I can ask at this price range.

I already knew the Pigma Microns to be great, consistent writers and these were no different. Every time I wrote with them, I got good consistent lines and they fare well on lower quality paper. I can’t prove that they’re archival, but they are definitely waterproof. I used the green, red and brown in one of my first watercolors and they didn’t budge.

The colors I got in the 6-pack were Black, Brown, Red, Purple, Blue and Green. The Black gave the darkest and most opaque line. The purple and blue were really pleasant colors and they came in second in opacity. The red and the brown were slightly less saturated than the purple and blue. Lastly, the green almost felt like a highlighter since it was so light. Out of the six colors, the green was my least favorite because it was so lightly saturated and it was a strangely cool green. The brown was my second least favorite, mainly because it was a really light brown and I hoped for something darker. 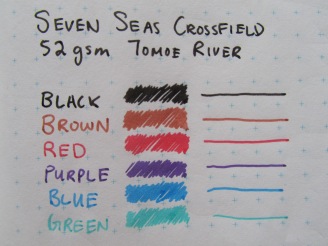 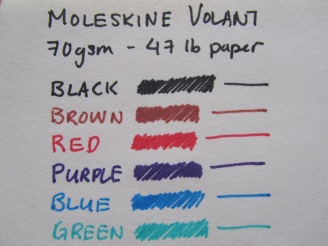 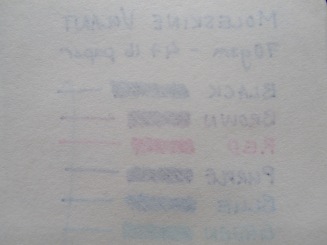 I will admit the shades of the colors were well represented by the swatches on the back of the pens. Unfortunately, most of the colors weren’t as opaque as I hoped. The green on the swatch was definitely a cooler green. Though I hoped the actual green was a bit warmer, I can’t complain that I was misinformed.

Overall, I do with the colors were more opaque. Obviously, I don’t know what it takes to make the inks waterproof, archival, etc. So, if this was the best they could do with the opacity, I understand. However, I wish they went with more standard color shades. Though some might say they’re boring, at least they are time-tested pleasant colors. I probably won’t be repurchasing any of the non-black Pigma Microns. Instead, I will explore the various tips sizes of the black color because I personally loved the black.

If you don’t mind a lower opacity level with the non-black colors, if you want waterproof, archival, dependable felt tip pens that fare well with most papers (including cheaper paper) and if you like cooler greens and lighter browns, then I think you should consider this set. You can find this set at Amazon, JetPens, JoAnns, or most other craft supplies retailer.